What is Nearshore Development?

An increasing number of companies are opting to use nearshore outsourcing—either as their primary software delivery model or in concert with onshore and offshore resources. Distributed Agile development is widely practiced due to the seamless collaboration between teams working within similar time zones, as well as the cost savings that result from reduced overhead and lower service fees.

According to the 14th Annual State of Agile Report,
81% of respondents said their organization practices Agile with team members distributed (not co-located).

The Benefits of Nearshore Development with Gorilla Logic

Take advantage of our proven, cost-effective nearshore software development model—one that offers knowledgeable, resourceful Agile experts in your time zone. Headquartered in Broomfield, CO, and with nearshore development hubs in Costa Rica, Colombia, and Mexico—our developers are English-fluent and culturally aligned with your organization, making communication with your development team seamless. Nearshore outsourcing delivers results faster and provides greater efficiencies than traditional software development outsourcing, so you can optimize your budget, increase your project velocity, and achieve awesome results. Our business model and continuous delivery of game-changing web and mobile applications have led 80% of our Fortune 500 clients to stay with Gorilla Logic for more than five years.

Transparent communication in your time zone

Working with traditional software development outsourcing teams in highly disparate time zones reduces the opportunity for collaboration and increases the time it takes to exchange critical information and feedback. This results in an increased risk of error and missed deadlines. Our nearshore developers operate within your time zone—delivering answers, updates, and results on your schedule.

Our nearshore software engineers readily integrate with your existing resources and business processes—providing a focused, unified development team that is committed to your success. Build your apps the way you want, with your tools and hand-selected developers that best fit your business and project needs and company culture.

“Although collaboration tools have made communication easier, challenges around access to talent, time zone, and cultural similarities persist. U.S. companies are adopting nearshore development as a cornerstone of their product development strategy to stay competitive.”

Costa Rica, Colombia, and Mexico each rank within the top five most innovative economies in Latin America, according to the Global Innovation Index. Each country boasts a large talent pool of highly educated technology professionals and has been able to leverage this population to stand out amongst offshore and other software outsourcing locations. Because the cultures encourage networking and collaboration, the nearshore development community is similar to what exists in Silicon Valley—offering meetups, hackathons, and programs such as MenTe, designed to involve women in science and technology endeavors. Costa Rica, Colombia, and Mexico have also aligned themselves with Silicon Valley and other technology hubs through the pursuit of certifications such as PMP, Six Sigma, and ITIL.

In recent years, many foreign companies have begun operations in Costa Rica, Colombia, and Mexico. Twenty-four percent of Fortune 100 companies, including Amazon, Citibank, and Procter & Gamble, are choosing Costa Rica for their strategic nearshore development settings, while approximately 200 foreign companies are now operating in Colombia. Top technology companies and venture capitalists are also investing heavily in Mexico, specifically its growing IT outsourcing sector, which has been growing at a rate of 10-15% annually.

Companies across all industries are taking advantage of the highly educated talent pool and business-optimized environment in these strategic nearshore development outsourcing locations. Here are some key reasons why companies are choosing to nearshore software development in Costa Rica, Colombia, and Mexico:

The geographic proximity of Costa Rica, Colombia, and Mexico allows U.S.-based clients to collaborate with their nearshore development teams during the same workday.

Gorilla Logic’s strict vetting process, along with a large population of English speakers in each country, ensures that our software engineers in Costa Rica, Colombia, and Mexico are English-fluent, making communication with nearshore development teams a breeze.

High levels of investment in education in Costa Rica, Colombia, and Mexico have resulted in a deep pool of software engineering talent in each country.

Travel between the U.S. and Costa Rica, Colombia, and Mexico is relatively easy, with a large number of available flights daily.

Innovation and quality of work

Costa Rica, Colombia, and Mexico each rank in the top five most innovative economies in Latin America.

Offshoring software development can be an acceptable option for straightforward maintenance tasks, basic enhancements, and very well-defined waterfall projects. But when it comes to complex software builds, there are many issues that can completely derail a project, including language barriers, skill sets, and time zone discrepancies. These issues increase the likelihood of delays, rework, missed deadlines, and internal team frustration. As Gartner points out “Offshore Agile is considerably more difficult and risky than nearshore Agile.”1 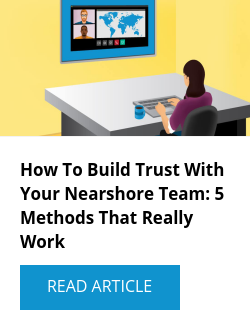 “However, there is one challenge that technology cannot overcome — time zones. As a rule of thumb, communication is easiest if there is an overlap of at least four hours between the business days of the central and remote locations.” 1

We offer a variety of engagement models to help you stay ahead of the innovation curve.

The full-stack development capabilities we offer:

After years of experience in the Agile software development industry, Gorilla Logic has recognized the infinite success that is only possible with a nearshore outsourcing model. Organizations that value the transparency and efficiency of Agile software development find that working with a nearshore distributed team also enables them to get more value from their budgets.

Get the benefits of nearshore outsourcing.