So You Want To Do Mobile Application Development?

Mobile application development has been a big deal for several years now. When we talk about it, we are not talking about anything new.

Technologies, tools, frameworks, services and pretty much everything related to this subject are getting better and better every day. It is a great time to be a mobile developer because the most popular frameworks for mobile are so advanced.

But even with the overwhelming amount of documentation, examples, and guides, I frequently hear questions and/or comments regarding mobile development from both experienced developers (with no experience in mobile) and junior developers. There are still some misconceptions about the common terms and tools, and where to begin.

With that being said, here is a summary of what I’ll be covering in this post:

What Are We Discussing?

We are going to be doing a short review of each of the most popular and promising technologies used today in order to build mobile apps. These are:

I’ll summarize how each of these work, what the pros and cons of each are, and why each one could work for you given your previous experience and requirements.

First off, my intention is not to declare a winner amongst these technologies. My goal is to help you know how each works and what you need to begin using each. Ideally, I want to encourage you to give each a try and then you can build your own opinion. I’m starting with Ionic because if you have done web development (HTML, CSS and JavaScript) this will be the most organic option for you. This is because Ionic relies on these tools directly.

Ionic is built on top of Angular; the great JavaScript framework built by Google. Angular 2 uses TypeScript and Ionic 2 does the same. These two things (and Apache Cordova, which we are going to be talking about below) are probably the most important things you need to learn to start building apps with Ionic.

Ionic is an hybrid-development framework, which means you are not going to be developing fully native apps. You are going to be creating hybrid applications.

The main thing you need to know about hybrid apps is their UI (the part the user interacts with) runs into a WebView – a kind of browser which runs in fullscreen mode. There is more behind what a WebView is, but that’s beyond the scope of this post. What I want to point out is Ionic apps run in a single threaded WebView. Then Cordova creates a bridge, which lets you consume native API’s and interact with the hardware of the device to do things like use the camera to take photos, make your device vibrate, deal with push notifications and so on.

The good thing about Ionic is it implements the core principle of HTML5 framework which is: write once, run everywhere. This means with the same code base you can run your app on all platforms supported by Apache Cordova.

The bad thing is hybrid apps don’t provide the same user experience because they use a single thread and user interactions have to pass different  extra layers to get to the hardware and native API’s. Most hybrid apps have problems like scrolling on large lists of data or supporting complex animations, especially on old devices using old WebViews.

React Native is the new bad boy in town. It’s built by the giant Facebook. It was announced two years ago and since then the excitement has grown like crazy.

Unlike Ionic and other hybrid-platform options, with React Native you can create truly native apps. It’s a JavaScript based framework, which uses native UI components in combination with their Virtual DOM concept and an extremely efficient algorithm called diff, which lets them refresh the UI with the least amount of steps possible.

Another difference between React Native and Ionic is there is no guarantee you will be able to reuse your whole code to make your app run in all supported platforms (iOS and Android). Sometimes you will need to write specific platform code. But, don’t worry, React Native has great support to do these kinds of things (as I explained here before). There is also a chance that you will need to write native code to support your own functionalities at native level and speed up your app. Unlike Ionic and all the hybrid options, the React philosophy is: learn once, write anywhere.

If you check on the internet you will see a lot of people saying React Native’s learning curve is easy, but I have to disagree a little bit. This is because people with little mobile development experience won’t understand some of the basics.

If you don’t have any experience with React (and keep in mind that React covers only the presentation layer) you are going to need to learn how to handle the state of the app, how to notify and propagate events, how to navigate between views and so on. That is when something like Redux joins the party. There are other options for Redux, but that’s the most popular option.

Finally, in case you don’t already know, you are going to need to learn ES6; not because you have to use it to write apps using React Native, but because almost all of the documentation and examples out there are written using ES6.

NOTE: Don’t be afraid to learn all the things mentioned above. It’s actually exciting to challenge yourself!

NativeScript is also a cross-platform framework built by Telerik. With NativeScript you can create truly native apps. From the development experience perspective, it has several similarities with React Native. To define your UI you will be using XML files, where you will define NativeScript components that wrap native components. It also uses a very similar approach to React Native to apply platform-specific customizations.

On the other hand, it also shares something really important with Ionic – it supports TypeScript and Angular. This is optional because you can write your app using plain JavaScript, but if I were you, I would take advantage of the power of these two great tools. I guess you could say developing an app using NativeScript feels like Ionic, but the app itself feels like React Native, or better, just native.

Using NativeScript your JavaScript code runs into JavaScript engines (virtual machines), JavaScriptCore for iOS and V8 for Android. This strategy comes with a price on startup time and package size. Most complaints about NativeScript are about startup time, but their development team is doing a great effort to improve this. One of the nice things about NativeScript is they release new versions very often and the evolution of the framework is pretty fluid.

There are also plugins for most of the things you need to do at native level.

Xamarin is a cross-platform development framework supported by Microsoft. It lets you create mobile applications using C# and F# and define your UI using XAML. Xamarin is the ideal option if you already are an experienced  .NET developer and you want to see results in the short term.

As you can imagine, because Microsoft backs Xamarin, besides iOS and Android, it also supports Universal Windows Platform (UWP).

The same way as React Native and NativeScript, in Xamarin you use common UI components, which wraps native components for each platform. The code itself gets compiled into binaries that will run natively on each platform. On Android it uses Just In Time (JIT) compilation. On iOS it uses Ahead Of Time (AOT) compilation.

One nice thing about Xamarin is it offers different ways or tools to build apps:

Pure native development is the best way to get better user experience because you use the whole potential of the operating system and the device.

On the other hand, if you want to create an application to run on both iOS and Android it means it’s going to cost you double: you have to learn both official languages (Objective-C/Swift and Java/Kotlin), double tests, double maintenance, two repositories and so on.

Pure native development is good if you really want to make a career path as a native developer for one specific platform, but if that’s not the case, all the mentioned options here are good enough to replace this option and make you a more versatile developer.

We are definitely living in a great time to be a mobile developer. Available technologies are becoming good enough to compete and replace pure native development. The one thing that’s for sure is that the technology will get better and new technologies will come. My advice for you, before you pick one, is to research all your options, give each a try, and write a small “hello world” to see how comfortable you feel with them.

Once you have done that, try to review this list of topics/ideas before you make your final decision. This is my list, but you should make your own or modify this one, but remember these important points: 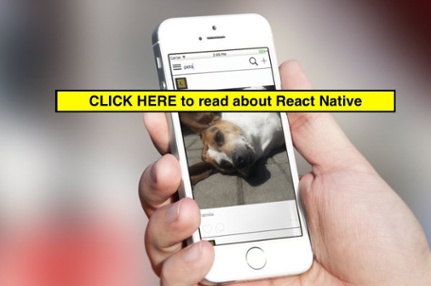 Diego is a full stack developer with more than 9 years of experience with most of it in .NET technologies and Javascript. In his free time, he enjoys dogs, football, basketball, pizza, tattoos, drums, family, friends, Thai and Chinese food, concerts, jokes, Twitter, memes, and technology. You can check out his GitHub here: https://github.com/ElNinjaGaiden.

What are Smart Contracts?