Mobile NFC: A Practical Use Case Part I

In this blog series, we will tackle a quick introduction of NFC Technology and current capabilities of mobile NFC on the two most used platforms, Android and iOS. The second post will take you on a little tour about developing an application that takes advantage of this technology and explores a bit of the wide variety of possibilities NFC could offer.

As human-computer interactions expand, companies need to think of new solutions to provide better user experiences in different fields such as marketing, sales and information transference.

Nowadays, most of the mobile phones available on the market, integrate sensors and other technologies that can maximize the interaction with tangible or virtual solutions. Technologies such as NFC (Near Field Communication) or QR Codes provide users with an intuitive user experience. Usage of these kinds of app-integrated sensors can instantly give users accurate information about the product when required.

Although it seems complicated, NFC technology has simplified the experience between humans and objects by using the phone as a mediator to ease a wide variety of actions, from the visualization of information and checking stock availability, to using the device as an electronic badge which grants permission to secure areas in facilities. The challenge is not only in the implementation and integration of the system with current apps; an easy, comfortable and intuitive user experience is also required.

NFC stands for “Near Field Communication” which enables communication between two devices across a short distance. To start communication, at least one part must transmit to the counterpart that will receive the signal. A range of devices can use the NFC standard. Devices are considered either passive or active; the initiator actively generates an RF field that can power a passive target. Targets can take very simple form factors such as unpowered tags, stickers, key fobs, or cards.

The technology used in NFC is based on older RFID (Radio-Frequency Identification) technologies, which used electromagnetic induction in order to transmit information. Passive RFID Infrastructure, that implements ISO 18000-3, is compatible with NFC since it operates at the same frequency. Other RFID technologies that do not implement this standard, are not compatible since they use different frequencies. How Does NFC Work

Each NFC device will have a loop antenna that will be “half” of a transformer. When one of the parts uses an electromagnetic induction in a near field, it will form an air-core transformer. This electromagnetic field can be used to transmit data between devices full duplex, or directional, when a device is read-only (like a tag).

A mobile device, for example, can work as an active or passive actuator. Not all devices support NFC and not all supporting NFC devices implement all the capabilities that NFC offers. When a mobile device (that supports NFC) gets close to a tag, it can read or write information on it. If the other side is another mobile device, they can share information or even initiate another form of communication without the need of pairing.

NFC tags are passive and will wait until a device that tries to read or write them, inducts an electromagnetic field, allowing the tag to use that power source.

The stored data on the NFC tag may contain any form of data, but common applications are for storing URLs where the NFC device may find further information. Other applications might be more complex, allowing the tag to perform minor operations. For example, there are some tags that may contain a private key and compare data encrypted with a public key and validate if an active NFC counterpart is allowed to read or write data into the NFC tag.

Generally, tag size ranges from just a centimeter or two to a few inches. Tags with higher memory and larger antennas are bigger. 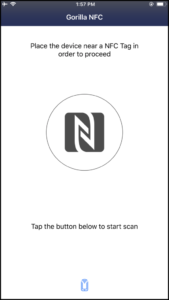 Android devices are usually looking for NFC tags when the screen is unlocked unless NFC is disabled in the device’s Settings menu. When an Android device discovers an NFC tag, a special tag dispatch system analyzes the scanned NFC tag, parses it, and tries to locate applications that are interested in the scanned data in order to achieve the desired behavior.

From iOS 11 onward, iPhone devices can detect NFC tags and read messages that contain NDEF data using the Core NFC Framework. Using Core NFC, NFC tags types 1 through 5 can be read in the NFC Data Exchange Format (NDEF). Once a device (e.g. an iPhone or an Apple Watch) is ready to read data from an NFC tag, and it’s placed near the tag, information is transferred between the NFC tag and the device. Apple currently does not support writer mode, P2P mode and Card Emulation mode, as Android does.

In order to avoid counterfeiting, Victorinox added a smart NFC label to their high-quality luggage division. With this label, consumers and retailers can use a smartphone to identify a product as an original.

This allows restaurant customers to order directly from their table. On every table, there is a tag with an NFC or QR code that connects the user to the restaurant using their smartphone device.

In addition to wirelessly playing music via Bluetooth, these headphones use NFC to make a quick connection to the mobile device.

Stay tuned for the second part of the series. See an NFC-capable proof of concept Android app as well as a review of Android capabilities in terms of using NFC.

NFC Tags on How Stuff Works Franklin Garcia is a Mobile Engineer. He originally began as a Java Developer working on backend, then switched to Android 7 years ago. Franklin is a fan of motorcycles and adventure riding. he also enjoys extreme sports, video games, board games, photography, cooking, learn languages, and Lego Mindstorm, Arduino and anything related to the Internet of Things.